During Winter of 2013, I had the opportunity to move 2,000 miles from my beachy little hometown, Pacific Grove located two hours south of San Francisco. I was a Marketing Assistant for a Cycling Safety Product Company, in my early twenties, single & now had the opportunity explore a different state. Cool right?  Well that 2,000 miles was Arkansas–  yes, Arkansas.

My first reaction was a big NO & it was not negotiable.

Growing up, I wanted to be a fashion designer/buyer & live outside the Garment District in LA or in a loft apartment on top of a swanky restaurant in SF. Moving to a place like Arkansas, didn’t exactly seem to fit me. Although I had given up the idea that living in a big city like LA or SF wouldn’t actually be my perfect dream, Arkansas seemed a little bit extreme.

I loved my job but did not particularly love my boss. It was because of her I got to travel to trade shows & found out I loved marketing, so after some time the thought of exploring the Midwest & Southern States didn’t sound terrible. I manically started to google Arkansas… thinking I should just go for it. Of course I expected this foreign state to be filled with chatty old farmers in overalls drinking tea on their tractors (sweetened of course because as I learned the hard way, you offend the whole restaurant if you don’t drink it that way). Stereotypical, I know.

I have always had an infatuation with the agriculture & farming lifestyle. Growing up on the Central Coast, I was well aware that most of the produce in the US was grown right in our backyards. Even as a kid, I  loved cattle & even dreamed of having my own, along with living on a farm- after I did the whole city thing of course. Arkansas sounded like it would be a good place to test that out.

When I broke the news to my family,  my dad was not thrilled with this idea of moving. Being a daddy’s girl I ALWAYS wanted to be with him (& still do).  The oldest of his 3 daughters leaving the state, he was more like…pissed. Real pissed, as in the “I’m not mad just disappointed”  I would make that decision. Parents being disappointed is worse than getting in trouble– I swear! He asked how could I leave Pacific Grove? “Monterey County  is one of the most beautiful places in the US, why leave for some podunk place called Arkansauce?!” was the line that he kept repeating to me like a broken record.

I decided to make a deal with myself & Dad that I would go for 6 months then come back home to my life in my little beach town. The plan was to head east- hire a new office crew, help train & go back to California. After all this would be a great resume builder, especially at such a young age. That was my story & I was sticking to it.

In the Summer of 2014, just a few days before my birthday, an old coworker, J & I packed up a 17 ft u-haul full of our office supplies & pulled my Toyota Corolla behind us. J & I switched off driving & made some unforgettable memories along the way & on night one, we even danced the night away (I DO NOT DANCE) in a motorcycle bar in Willams, AZ. When we finally made it to Arkansas it was hotter than hell & my new house was in the absolute middle of nowhere on the lake. We decided to ditch the unpacking & head to the water.

After J flew back to California, it really sunk in that I just made this big move alone. No family, friends or familiar faces at the office on Monday morning–just me.

Boy was I WRONG about this Arkansas place. The traffic was insane & the towns so overpopulated with other Wal-Mart Vendor transplants–just like me. Not one pair of overalls in sight & all the cows were in city limits, jammed into backyards next to the highways…major disappointment.]

Fast forward just two short months after living in Arkansas..August of 2014, I was in a life-changing car accident. I was traveling southbound on I-49 when construction debris flew out & hit my car, causing me to lose control. My car rolled three times & only stopped after the third roll when it hit a concrete divider on the other side of the highway. I remember feeling like I was watching myself flip in the car. As the car was rolling I was so alert, I can still remember seeing the yellow lines on the highway each time it rolled, my face next to those lines staring at them. The crazy thing was I had no pain at all. Even when I looked in the mirror, my face & neck were covered in blood. All I could see was the white of my eyes. It was like I was standing outside of my car looking at myself through the window,  wondering what I was doing. It was like I was in a dream, watching myself in slow motion, re watching the accident happen over & over, calmly telling myself to find my phone & call my dad. When the highway patrolman got to the scene, I was still so calm & to his surprise I was alive. When he walked to my shattered window, he just stared at me. I couldn’t get any words out other than “please help me” & I grabbed his arm, he jumped & said “I thought you were dead, I need a minute” & walked away. Not exactly the words you want to hear when you think you’re fine & trapped in your car. I later found out he had a daughter my age & by the looks of the car, not one of the responders thought whoever was in the car could have made it out. 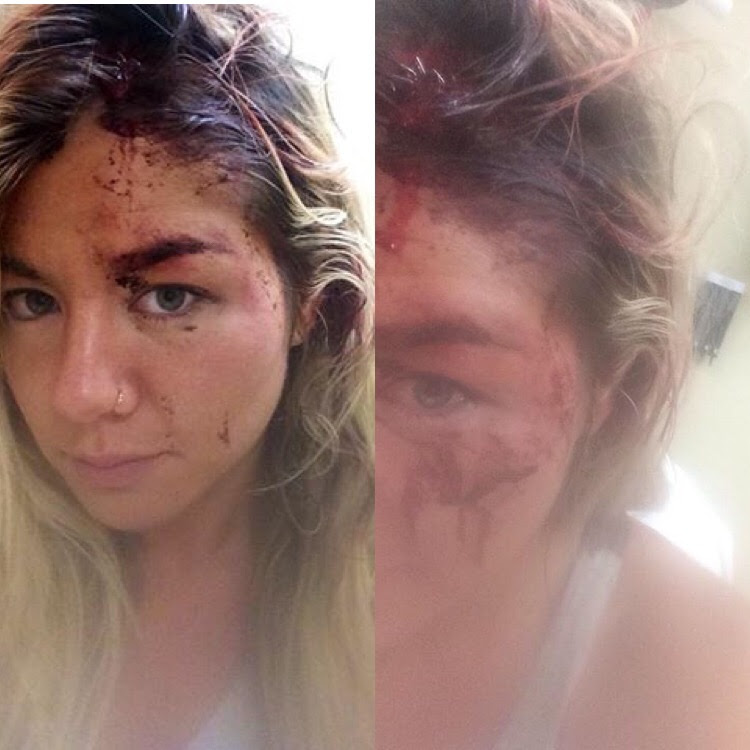 These pictures are after I was cleaned up. The others are too graphic to share.[/caption] 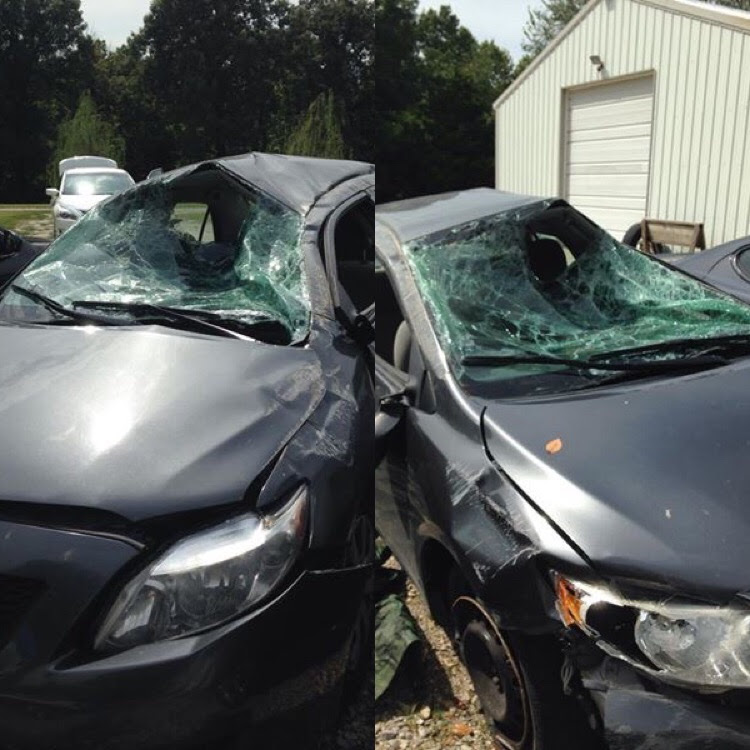 Two of the pictures of car at the wreck yard.

2 men from Missouri, (that did not know each other) pulled over & waited next to me. They were both traveling North & both jumped the Interstate concrete divider to wait with me & even gathered my belongings from the road. I called my dad & told him I had been in a little accident but I was okay. One of the men called him back & explained otherwise. After that I remember the firemen arriving & I asked if I could get out of the car yet. I was so upset with them for not even letting me try to walk or get out by myself. They used the Jaws of Life to get me out. I don’t remember getting out of the car. I blacked out & woke up in the hospital room, bright lights everywhere just like you see in a movie. I seriously was blessed that evening because I made it out of the accident with 6 staples in my head & a grade 3 concussion. The highway patrolman came and visited me & also checked on my throughout my recovery.

My mama flew out and stayed with me until I was back on my freshly planted Arkansas feet. She insisted that I needed to start a blog then, because everything seemed so crazy over here & yet I still wanted to stay here (do we ever actually listen to our parents the first time they say something!? heck, I don’t listen to anyone the first or fifth time anyone says something). I refused because I was worried what people would think, like I couldn’t make it over here or something. When we went to look at my car & get my belongings out… I quickly looked at how mangled the car was & decided I wanted nothing out of it. Looking at the car made her feel better because she knew someone was watching over me to actually make it out of something that looked so horrible. It took awhile for the actuality of the accident to kick in, it just didn’t feel real. I felt like I was in a weird dream that I kept waking up before the ending over & over. When my mom left, the accident felt more real than ever.

I quit that job & decided to stay in Arkansas. I moved into a friends house for a few months so she & her 6 year old could help me get on my feet. Let me tell you, when you’re recovering from a brain trauma, the emotions are so intense, no amount of paperwork at the hospital could prepare you for that.

Before this accident my brain was at 110 MPH, I was a workaholic traveling a lot, running on coffee & airport snacks. I was always going wherever I was needed because I was the youngest employee, the only single one with no kids & after all it was the best way to get to see new places. I was working trade shows in different cities monthly. In Arkansas I was adjusting to not having family & trying to make friends when I lived 30 minutes from town pretty isolated out on the lake.

Aside from that my crazy (ex) boss had just arrived in Arkansas the day of the accident. Part of the reason I was SO anxious was because she had just landed & was already stomping around like Meryl Streep in the ‘Devil Wears Prada’, except mine was wearing cycling shoes & a helmet. She was at the office/ my house/ guest houses that evening I left to go to the gym. She was on the phone when I left & quickly ran out the door after she mouthed “be safe” to me.

There were a few really significant instances leading up to the accident but I will just share these ones with you.

Moment of Impact #2) My Dad, Aunt & 2 younger sisters were at “Country Night” at the County Fair back home. It was a family tradition and it was the first one I had missed ever. Dustin Lynch was playing & my dad had sent me a video of him covering “It’s a Great Day to be Alive” by Travis Tritt– I didn’t get it until I was at the hospital & he had sent it before the accident happened.

Moment of Impact #3) MY word choice here was very strange..a friend texted & asked how the day went with the crazy boss in town, my reply “Ah, I survived”…30 minutes later I was in the wreck & the first responders weren’t sure how I survived..

These few things leading up to the accident freaked me out. My bosses words, my Dads text, my choice of words in the texts… It’s funny how life really does work out how it is supposed to.

I recovered from the accident, ditched the corporate job, ditched anyone that had a negative attitude or impact on my life, moved to a horse farm & ATV ranch where I traded taking care of the horses for rent & stayed in the Midwest.

Through all of the troubles I’ve gone through since the move, I have ended up finding different types of love through these hardships I never even knew existed.

I moved across the Arkansas State line to Missouri. My curiosity to learn about farm life grew & I was surround by old farmers willing to teach me or help with anything I asked.

This blog was started to attempt to share the silly, crazy & emotional things that occur daily in my new life 2,000 miles away from “home”.